The three models implemented in this repository are:

We trained the three models during 2 to 4 days on a Titan Black GPU. The following results were obtained:

Here is an example of attention weights used by the attentive reader model on an example: 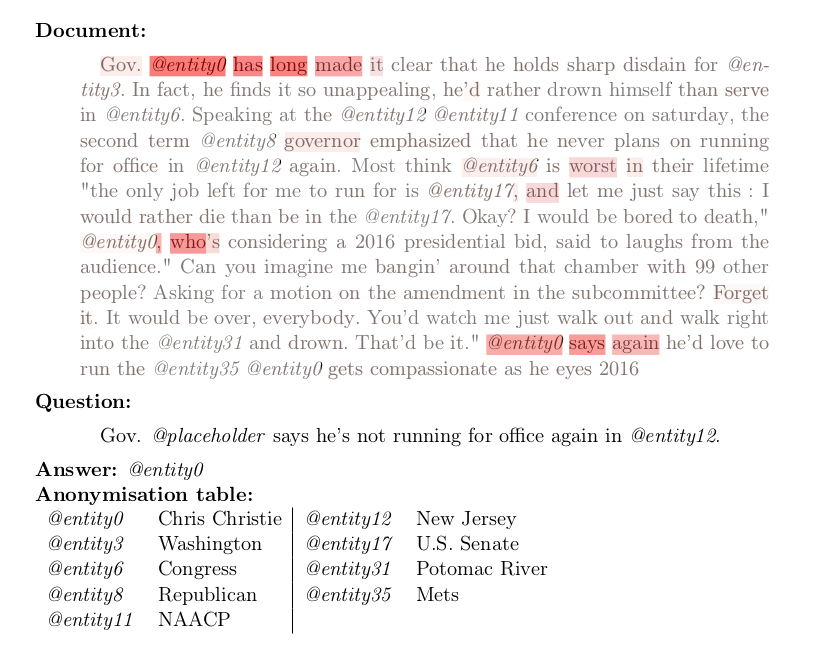 We recommend using Anaconda 2 and installing them with the following commands (where pip refers to the pip command from Anaconda):

Anaconda also includes a Bokeh server, but you still need to install blocks-extras if you want to have the plot:

The corresponding dataset is provided by DeepMind but if the script does not work (or you are tired of waiting) you can check this preprocessed version of the dataset by Kyunghyun Cho.

Set the environment variable DATAPATH to the folder containing the DeepMind QA dataset. The training questions are expected to be in $DATAPATH/deepmind-qa/cnn/questions/training.

This will copy our vocabulary list vocab.txt, which contains a subset of all the words appearing in the dataset.

To train a model (see list of models at the beginning of this file), run:

Be careful to set your THEANO_FLAGS correctly! For instance you might want to use THEANO_FLAGS=device=gpu0 if you have a GPU (highly recommended!)

We would like to thank the developers of Theano, Blocks and Fuel at MILA for their excellent work.

We thank Simon Lacoste-Julien from SIERRA team at INRIA, for providing us access to two Titan Black GPUs.